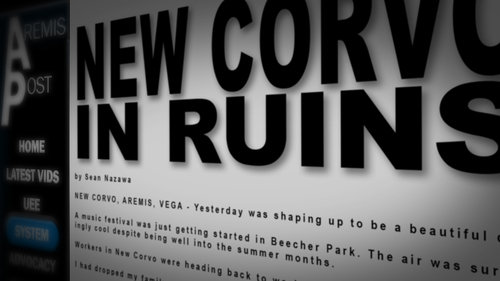 NEW CORVO, AREMIS, VEGA – Yesterday was shaping up to be a beautiful day.

A music festival was just getting started in Beecher Park. The air was surprisingly cool despite being well into the summer months.

Workers in New Corvo were heading back to work after lunch.

I had dropped my family off at Kiering Station. It was my father-in-law’s birthday in Estilia and they were heading up early to surprise him. I was supposed to follow later in the day.

Walking back to the Aremis Post offices along bustling streets, a dull noise cut through the din of the city. All around me mobiGlas began to flash with an emergency warning. I hadn’t seen one of these in a while. It was a basic non-flight advisory and said details were pending. I had started to move on when the old civil defense sirens began; their sound echoed off the tall buildings along Mackelroy Street. Instinctively, my head turned towards the sky.

Next thing I knew, I opened my eyes to find the city awash in flame and smoke. A body, charred beyond recognition, stared vacantly at me. As I pushed myself away, I realized that everything was muffled, like the world’s volume had been turned down. I shakily got to my feet and turned to look at what had knocked me out. It was a crumpled Aurora, still smoldering from plasma blasts.

I could taste ash in my throat. My eyes burned from the thick clouds of pulverized concrete and smoke as I stumbled down Mackelroy. With each step, the ringing in my ears subsided. I didn’t know where I was going. Neither did anyone else. We were scattered. Crazed. Scared.

The skies were filled with Vanduul. Local law enforcement and private civilians were battling above the city while others tried to flee. From the shouts of people on their mobis, it wasn’t just here. There were attacks all over the planet.

Police units swept down the block collecting survivors and escorting us through the collapsing buildings to a safer location. Saint Aerik’s Hospital was already overflowing. People slumped on the floors, covered in dust and blood. Screams and sobs echoed over the shouts of medics and doctors as they struggled in the smoke to save lives. It was tough to tell who was dead and who wasn’t.

The walls of the hospital shook with each deafening explosion. With each one, I thought that was it. I was dead.

And all I could think of was my Casey and little Natalie and how they said they’d see me later.

I had no medical training, but I couldn’t just sit there anymore. I set out, looking for some way to help. I found an abandoned foodstall. The thing was mostly empty except for boxes and boxes of cookies.

A few others saw what I was doing, and helped me grab what we could. Together we walked around, handing them out.

Peter Marsters, a local hauler, was nursing a fractured arm. The triage tag said he was a low priority, but you couldn’t tell by looking at him. He’d been on the final leg of a shipping run when he entered the system. As he did, he detected the 2nd Fleet massing above the planet, near the Vega-Virgil jump point. Commanded by Admiral Ernst Bishop, who has served along this front for some time, the group of ships included a Bengal carrier, several destroyers and a handful of smaller capital ships.

“I’ve been to the border systems a bunch,” he said, gently dabbing the cut above his eye with his uninjured hand. “So I know when the Navy’s running drills. This was no drill.”

Marsters was passing the fleet and just about to enter atmo when the Vanduul charged.

“I used to think Bengals ate up and spat out Vanduul for snacks, but what I saw coming out of the black … I never seen anything like it.”

UEEM Trooper Evey Ghora, 26, was being attended by three medics. She had suffered multiple stab wounds after confronting a Vanduul raider in the street with no weapons. Once they managed to stabilize her, she was able to offer me an opposing point of view.

“I’m not one to talk up the Navy too much, but that’s Bishop’s crew,” she said, brightening up when I offered her a handful of chocolate cardol cookies. “The ‘duul don’t stand a chance.”

Three hours later, the explosions subsided. Hospital security watched the doors, unsure whether the silence was a portent of something good or bad. Finally a detachment of local police approached with news:

The main Vanduul force had been repelled. Admiral Bishop had won.

When morning came, fires were still burning out of control. Comms were down and I still couldn’t reach my family. Officially, it all became numbers: estimated death counts, how many personnel were needed for search and rescue and the true sign of the devastation: how much damage in Credits. Anything to avoid putting faces to the horror that we had all endured.

Admiral Bishop had come to the planet to survey the destruction personally. The Hero of Vega apparently refused to comment.

Having heard no word yet on any trains to Estilia, I found myself back at Saint Aerik’s while waiting for the UEE Disaster Response Team announcement outlining their protocol for contacting missing relatives. Inside, I ran into one of the medics, who hadn’t yet slept. He informed me that Trooper Ghora had taken a sudden turn and passed away from her wounds early in the morning.

They say it could have been worse. That if Admiral Bishop’s fleet had not pushed the Vanduul back, the destruction would have been more severe.

I don’t know if I can believe that.