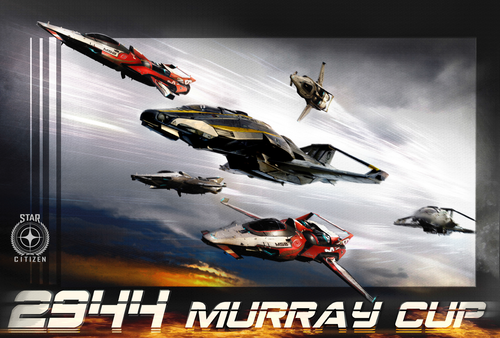 The Murray Cup is the unquestioned jewel in star racing’s triple crown. Every year, top racing teams pour blood, sweat and money into attempting to take the top ranking in the challenging system-wide race.

The Murray Cup tradition dates back to the early settlement of the Ellis System circa 2467. The government’s move to terraform four planets at once in the newly discovered system lead to a necessarily massive influx of population and space equipment. With little to do beyond wait for their machines to begin altering planetary core temperatures, terraformers and their families began to pass the time by racing their idle work spacecraft.

Soon, makeshift racing challenge tracks were constructed using leftover terraforming equipment, and company craft were modified for speed. It got to be that racing wasn’t something to do while not terraforming, but rather that the terraforming was something you did so you could race. The pastime’s popularity spread beyond the system, and soon non-terraformers began to arrive to try their hand on the challenging course.

Meanwhile, Amon Murray smelled profit. Murray was a criminal and a gambler who amassed a small fortune by selling bored terraformers drugs and other contraband. He became fascinated with the makeshift races, not as a competitor but as an organizer and bookie; he began taking bets on the amateur system races. After six months, Murray found that he was making more money from booking bets than he was dealing contraband. Never one to take a small fortune when a large one might be close behind, Murray committed resources to legitimizing the races, offering a small credit purse for the winner of what became known as, at Murray’s insistence, the first Murray Cup.

This first official race concluded with Ian Rikkord as the 2479 champion. An atmospheric specialist for Gaia Planet Services, Rikkord’s claim to fame became the sheer amount of customization he applied to his RSI Nova courier ship, beginning a five-century tradition of cup winners personally modifying stock spacecraft. The reaction to the newly organized racing was electric; new racers from all over the Empire and even beyond were lining up to take part, and with each successive year the Cup prize became larger. By 2488, Murray had “gone legit”; the erstwhile drug runner had repositioned himself as a public figure and the father of modern star racing.

The Murray Cup is divided into two race types: Classic (once colloquially called Hare) and Blitz (formerly Tortoise, or Div- T). Classic racing is exactly what would be expected: ships trying to out-navigate each other as quickly as possible. Blitz takes into effect ships’ weaponry, allowing pilots (with increasing restrictions over the years) to engage in limited combat during the race to disable, but not destroy, competitors. Though most pilots tend to specialize in one racing type or the other, to really become successful in the Murray Cup, it is important to master both skillsets. Racers will train for years to improve their ‘off style,’ with only a few exemplary pilots every becoming truly ‘ambidextrous.’

The Murray Cup’s inherent difficulty comes from the course itself, which now spans the entirety of the Ellis system and consists of multiple stages. Each leg is designed to take advantage of natural adverse stellar obstacles present in the system, such as asteroid belts and gravity wells, and, in the last few centuries, man-made obstacles like variable agility rings and targeting gate-locks. Some sections of the track notoriously require such a high level of precision piloting that they have earned themselves infamous nicknames such as the ‘Sorrow Sea’ or the ‘Boneyard.’ However, as much as the Murray Cup is about a proud racing tradition, the officials in the League continue to make annual alterations to the track in order to maintain the high degree of difficulty in the face of near constant improvements that manufacturers like RSI and Origin are engineering to make their racing craft ever faster and more maneuverable.

Of course, a ship is nothing without a pilot, and with the Murray Cup broadcast live across the spectrum, Cup winners quickly become legends in their own right. There are few who can think of the sport without mentioning greats like Terra McConoway, who in 2495 became the first person to ever win two Murray Cups, or Issigon Ado, who ushered in an era of interspecies participation as the first Banu to ever win. Then there are those who make history not just by winning, but by how they do it. Take Dax “The Hax” Emmelmann, who in 2731 set a new speed record thanks to his Aurora’s heavily modified thrusters. Generations of tinkers since have continued to strive to push that record even farther. Then there is the inspirational tale of Fabis Capaldi, who won in 2798 despite suffering from Rauk’s Syndrome, a true lesson that anything is possible.

In more recent years, we have seen the rise of greats like the Bakshi racing family, who have almost 40 years of racing and 3 victories under their combined belts and many more to come. Underdog Hypatia Darring still has fans clamoring for her to come out of retirement after her thrilling come-from behind win in 2934. Yet tragically, the pilot who is still at the forefront of most people’s minds is 2942’s winner, the late Zack Hugh.

Fatalities are no stranger to star racing; hundreds of racers and spectators have been killed as a result of accidents in a half-millenia of Murray Cup racing. None, however, have shaken the galaxy and racing culture like the accident that capped the 2942 Murray Cup. After a hard fought race, pilot Zack Hugh began the traditional victory lap, only to be hit headfirst by an amateur pilot, a lap behind, who had lost control of his ship. With that sad ending, racing’s greatest prize was awarded to a widow and the Murray Cup Racing League moved behind closed doors to once more adjust the future of the event.

In 2943, Commissioner Marco Verender announced that the race’s qualification process was being revisited in the wake of the 2942 tragedy. Starting with this year’s race, qualification is now determined by a point system that spans the entirety of the Cup racing season. Pilots who wish to qualify for the grand finalé must earn twenty “points” by placing in other authorized Cup races, with three points awarded for first place, two for second and one for third. The change, as well as updates to the rules for Blitz weaponry states, have been roundly criticized by race speculators who feel it cheapens the tradition in the name of safety and order. The overall impact to the race will be known soon: this year’s season is drawing to a close and a number of standout pilots who have already achieved the necessary twenty points are being followed closely by the media.