News Update: Will We Never Learn? 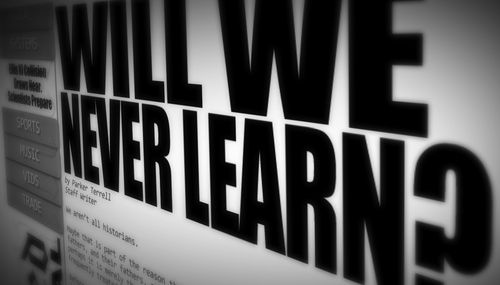 Will We Never Learn?

We aren’t all historians.

Maybe that’s part of the reason that we seem to forget the sins of our fathers, and their fathers, and on back to the dawn of civilization. Or perhaps it’s merely the fact that for the Human race, can and should are frequently treated as interchangeable.

Before you close comm channels on me for being some modern-day Luddite, let me make it clear that I am neither anti-progress nor anti-technology. Innovation is what makes Humanity so great – and what got us out into this grand universe in the first place. It is a given that progress generally requires risk.

The problem is that we often approach technology with a set of blinders on as to what has gone before, whether because the bottom line is more important than cautionary tales or because we’re prideful enough to think that we’ll do better this time. With few exceptions, each generation is more advanced than the last, and so we believe that we cannot possibly err in the same fashion as our parents did. So here we are again. ArcCorp’s new AI intiative, which has been roundly debated since their announcement two weeks ago, again seems to be running towards the same pitfalls as our ancestors.

Sometimes, it isn’t even our fault that we forget. It took nearly ten years of media investigation to wheedle the truth out of the government that maybe, possibly (sarcasm mine) the AI in the terraforming project had been at the heart of the Mars catastrophe of 2125. By then, nobody wanted to hear about it.

Of course, even that wasn’t the first AI disaster. The so called “Lemming Car” incident in 2044 Tokyo holds that honor. But less than 100 years later, the government decided that it had worked out the kinks in AI systems and shipped one off to Mars. Of course, they didn’t tell us about it, just in case they were wrong.

And then just over 100 years after the Mars catastrophe (are we seeing a trend here, people?), came the Artemis. Janus. Even with the vast spectacle of the launch, somebody somewhere had to be nervous that we were still treading the dangerous road of artificial intelligence. But this time, they were sure they had gotten it right.

Admittedly, we’re not certain that the disappearance of 5000 people was entirely the AI’s fault, but it certainly had to have played a part.

With a failure that public, the genie went back into the bottle for a while. But we weren’t done. The UEEN merely went back to being covert when they launched their latest failed AI project. Recently declassified documents show just how close we came to war during what became known as the Horus Incident. Working in conjunction with Aegis, the Navy deployed a prototype AI-piloted Overlord bomber wing along the Xi’An front. Their hearts were in the right place: it was an attempt to bring home pilots that had been stationed along the Perry Line for their entire careers. But when Aegis’ billion-credit babies decided that their comms were compromised and shut them off – just in time to miss their recall order – we had to chase down and destroy our own mistake, the death knell for Aegis in the shipbuilding industry. Again, we aren’t sure that they would have plunged us into all-out war with the Xi’An by wandering around unsupervised in the neutral zone, but what might they have done?

Of course, the Imperator tried to keep the whole embarrassing sequence out of the feeds. Still, at least it seemed that we had finally learned a healthy enough fear of ever using AI in ships again.

Now it’s the corporate sector’s turn to believe that it won’t repeat the mistakes of prior generations.

ArcCorp tells us that its AI will be able to learn, which will enable it to succeed where others have failed. (Where have we heard that one before?) But here’s the thing: Humans do that, too. They have to have years of experience, specific training, and the proper licenses to ever venture out into space. But ArcCorp wants to once again send the artificial equivalent of children out in massive starships to navigate the vastness of our interstellar empire.

Hey, it’s progress. It protects Human lives. It must happen.

Why can’t we learn?