The Orion System was first charted by a long-range UEE destroyer squadron in 2650. Low on fuel, the squadron made the transit to Orion in the hopes of collecting spaceborne hydrogen off the shoals of the system’s gas giant, Orion VII. The unit ended up spending three weeks insystem and producing in-depth star maps of the region. The system was found to contain a single habitable planet (Orion III, named Armitage by the explorers), few exploitable natural resources, and no additional strategic jump points. Locating nothing out of the ordinary, the UEE gave little thought to the system for the next two decades.

Following the upheavals of the 2660s, a strong colonial movement surged through the human homeworlds as politicians began to extol the virtues of once again “reaching out for the galaxy.” Despite lacking a strong selling point, Orion was chosen for one of the dozen-odd colony programs established during that period. Ostensibly a corporate project, the UEE-backed “Project FarStar” aimed to build the most distant human colony ever established; a record for the history books rather than any sort of practical settlement. Within five years, Armitage was a bustling, if unnecessary colony. However, colonists discovered a profitable lode of precious metals (chiefly gold and platinum) in the system’s asteroid belt and began to exploit that with some success. Modular farm construction began in earnest with the goal of someday providing food for nearby systems as FarStar expanded coreward.

This all ended on August 9, 2681, when mankind’s greatest menace made their entrance: a heavily armed Vanduul raiding party struck the main post on Armitage and slaughtered the colonists there to the last man (one citizen, a farmer, remains unaccounted for). The UEE was truly taken by surprise: there had been absolutely no indication of an aggressor species in the region, and intelligence from spy networks among the Banu and the Xi’an had failed to mention the Vanduul raids those races had recently suffered. Violence on Armitage was on a scale unprecedented in recent history and it immediately captured the attention of humanity’s home worlds.

The UEE deployed research assets to the region to study the threat, ultimately determining that the Vanduul considered Armitage to be a “feeding world.” Vanduul warrior hordes seem to travel nomadically, occasionally revisiting past areas that they have identified as reservoirs of natural resources. As such, though they considered Armitage ‘their’ world, they had only set foot on it once in the previous century. They were either nonplused at finding a working human settlement on territory they used for supply … or they were overjoyed at finding a new species of prey.

Vanduul attacks continued with some frequency: in six months, outposts throughout the Orion system had been raided fifteen times and casualties among the colonists were unsustainable. Although in public, politicians were out for blood and promised an eradication of the Vanduul threat, the truth was that deploying sufficient naval units to Orion would have been a logistical nightmare. The system was too far away to extend the existing supply chain and the reward was symbolic in nature. In two years, as the public furor subsided, Armitage was officially abandoned as a human colony world. The image of UEE fighters escorting a lengthy chain of transport ships away from the system remains ingrained in many memories.

Orion III consists of bleak, windswept plains pockmarked with the after-affects of Vanduul antimatter bombardment weaponry: blast craters and radioactive zones. Ironically, the ferocity of their attacks completely eliminated the new-gnu herds they once hunted on the planet … which, in turn, reduced the frequency of subsequent Vanduul visits to the system. A few abandoned farm modules still stand and the skeletons of several human cities still exist in the form of wreckage overtaken by natural vegetation. Occasional Vanduul settlement sites can also be found, although there is little of interest beyond the curiosity implicit in standing where one of mankind’s deadliest enemies once cooked dinner.

Why visit Orion? The simplest answer is that there is absolutely no practical reason to visit the Orion system or land on Armitage itself. The planet is home to a small settlement of humans. Living underground, they are the descendants of colonists who refused to leave when the UEE vacated. A hardy people, they are extremely insular and self-sufficient; they have little regard for the Empire and almost no interest in trading. It is possible to sell basic substance items, but without a great deal of markup. Luxury goods are worthless here and nothing is available for sale. Deposits of gold and platinum can still be located in the asteroid belt, but prospecting them is time consuming and transporting goods so far from the core worlds is a daunting logistical task.

Vanduul hordes do make transit on occasion to pick up food from Armitage and ore from the asteroids, and a pilot foolhardy enough to want to test his mettle against them could reasonably do so here. As the ecosphere on Armitages dies, Vanduul forays are becoming increasingly uncommon. The best tip for those seeking to engage the Vanduul here is that you should attack when they arrive in the system rather than as they are leaving; Vanduul only visit feeder worlds when they are low on supplies and are of reduced combat efficiency. But even a starving Vanduul is the greatest challenge a fighter pilot can face, and remember that the UEE will not pay bounties for kills scored in a red restricted system such as Orion.

Often forgotten is the fact that Orion is also the abandoned doorstep to the galaxy beyond known space. Astrophysicists predict that there are at least two unexplored jump points in the system and they believe that these in turn snake core-ward to regions now abandoned as human expansion has waned. As it is impossible to qualify the unknown, there is no way to promise that lucrative jump points or interesting galactic features lie beyond Orion … but if they’re anywhere, it is certainly one of the best places to start. With the proviso, that is, that a jump point on the far side of the Orion System is just as likely to lead you to more Vanduul forces as it is to unearth untold treasures. 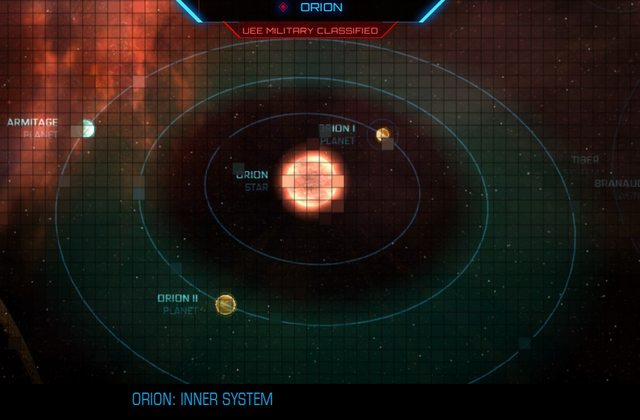 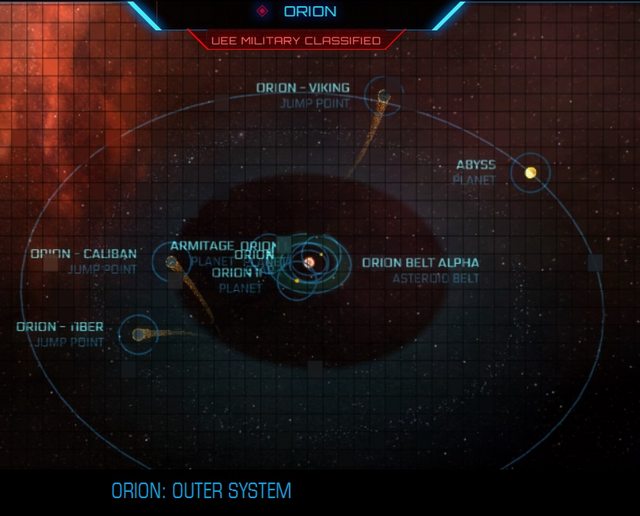